5 Christmas Specials to Make the Season Geeky and Bright

In the days before COVID, my husband hosted Christmas special marathons every year. We’d invite friends over to watch Christmas movies and TV episodes late into the night. We’d all contribute to the junk food and Christmas baking table, and one year we even managed to sit through the dreaded Star Wars Holiday Special.

We won’t be able to host a party this year, but that doesn’t mean we can’t watch our favourite geeky Christmas specials. Here are my top 5 geeky Christmas episodes worth watching. 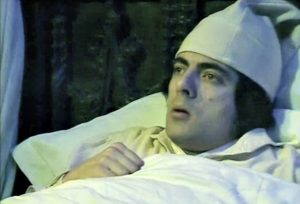 What happens: In this version of A Christmas Carol, the Spirit of Christmas visits Ebenezer Blackadder to congratulate him on his generosity. The Spirit of Christmas then shows Blackadder visions of his ancestors (the protagonists of Blackadder II and Blackadder the Third), who are cunning and selfish. Blackadder asks for a vision of the future if he follows in their footsteps and sees his descendant as a ruthless general in a galactic empire. Blackadder then asks for a vision of the future if he continues with his generous ways and see his descendant as a slave in that same galactic empire. He concludes that “bad guys have all the fun.”

Why I love it: This episode completely flips A Christmas Carol. Where Ebenezer Scrooge begins as a miser and ends a kind and generous soul, Ebenezer Blackadder starts off generous and ends bitter, vengeful, greedy. It’s a great twist on A Christmas Carol, and very fitting for the Blackadder character and series. 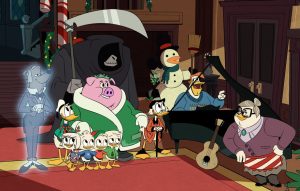 What happens: Scrooge McDuck travels through time with the Ghosts of Christmas to attend the best Christmas parties—a yearly tradition that started when the Ghosts of Christmas “accidentally” haunted him. When they set off for their night of debauchery, Dewey hitches a ride. He lands at a past McDuck mansion, where he finds his Uncle Donald as a kid. Together, they search the grounds for Della, Donald’s sister and Dewey’s mom who, at this point in the series, is stranded on the moon and has missed her kids’ lives. For Dewey, it’s a chance to meet him mom that he just can’t pass up.

Why I love it: This episode is a cute take on A Christmas Carol. Scrooge McDuck acts like a curmudgeon, but when Dewey catches him doing shots with the Ghosts of Christmas, Scrooge explains that he always has to act so responsibly—he just needs a night off. In true DuckTales fashion, this episode is all about the importance of family, both blood-tied and chosen. 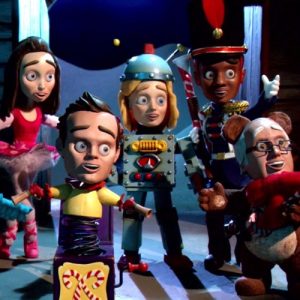 What happens: Abed deals with the fact that he won’t be getting a visit from his mom—who used to visit every December 9 and watch the 1964 stop-motion Rudolph the Red-Nosed Reindeer with him—by turning everyone into stop-motion versions of themselves (in his mind). Together, the study group travels through a Christmas-themed landscape to find the true meaning of Christmas and help Abed work through his disappointment.

Why I love it: Community is well known for its meta episodes. I like this one because it feels like a Christmas special: it has catchy tunes, a heart-warming message, and kid-on-Christmas-morning nostalgia all wrapped up into one episode. 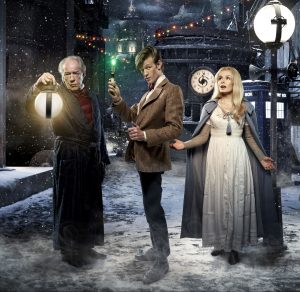 What happens: When a space liner full of people, including Amy and Rory, gets stuck in a strange cloud belt, the Eleventh Doctor tries to get Kazran Sardick, the man who controls the skies, to help it land safely. Kazran refuses, so the Doctor time travels into key moments in Kazran’s life to help him become more kind. We learn about Karan’s own terrible childhood and meet a beautiful singer, Abigail, who is being kept in cryo-sleep as “security” against a loan her family took out. Kazran and the Doctor wake her up every Christmas Eve to take her on adventures, but we soon learn that she has an incurable illness and only one more day to live.

Why I love it: This is yet another twist on A Christmas Carol. I like this one because, in the end, the Doctor doesn’t quite save the day on his own. Though his influence does change Kazran, he remains bitter because of Abigail’s fate. Ultimately, Kazran has to make the final step himself when he realizes how much he resembles his own father. Plus, it has flying sharks and fish. What’s not to love?

And my absolute favourite… 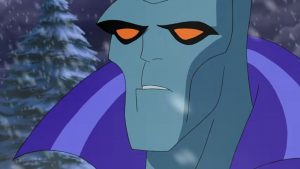 What happens: Superman brings J’onn J’onzz home for the holidays. Green Lantern and Hawkgirl have a super-powered snowball fight. The Flash plays Santa for some orphans.

Why I love it: The storylines with Green Lantern, Hawkgirl, and the Flash are fun. GL and Hawkgirl try to one-up each other in the snow before Hawkgirl takes them to a distant planet for the ultimate bar fight. The Flash battles Ultra-Humanite while trying to find the perfect gift for some orphans and delivering super-levels of snark. Plus, the look Hawkgirl gives GL when he makes a snow angel and says “See my wings?” is priceless.

What I love most about this episode is J’onn J’onzz’s storyline. At the beginning of the episode, he declares that the season has no meaning for him (makes sense: he’s a Martian after all). Not wanting him to be alone, Superman brings him home to the Kent farm. J’onn spends Christmas Eve wandering around Smallville in quiet contemplation: he hears a young girl thinking about Santa; he sees neighbours wishing each other well; and he hears the distant carols from the church. As the sun rises, he graces the Kents with a song from his home world. Queue the tears.