Every religion and culture has its own ideas about what happens to us after we die; it’s the one question no one can answer, no matter what they believe. One of my favourite things about worldbuilding is seeing how fantasy and sci-fi creators put their own spins on the traditional concepts of eternal rest and peace for good souls, and eternal damnation for bad souls.

Here are five great portrayals of the afterlife. 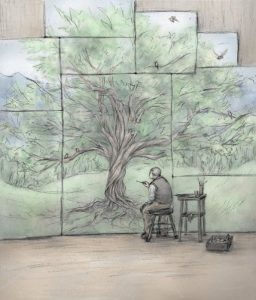 In this short story by Tolkien, the artist Niggle wants nothing more than to finish his great work—a painting of a tree in front of a forest. He spends as much time as he can on it, putting incredible detail and attention into every leaf. But, things keep getting in the way of painting: chores, duties, and the constant requests for help from his neighbour, Parish, who can’t walk and whose wife is sick.

Eventually, Niggle has to take a trip, for which he hasn’t prepared. As a result, he is sent to an institution, where he has to perform menial labour everyday.

After some time in the institution, Niggle goes to another place for “a little gentle treatment,” which he discovers is the Tree and Forest of his painting—but finished and fully realized. He reunites with Parish, and together they garden and make the country even more beautiful, before they eventually move on to their final destination of the Mountains in the distance.

One way to interpret this story is through the lens of Death, Purgatory, and Paradise. Niggle’s Death is the unexpected trip he hasn’t prepared for. Next, he spends time in Purgatory, performing menial tasks day in and day out. Finally, he moves on to Paradise, where he fully realizes his great artistic work.

It’s a quiet, allegorical story that depicts Catholic ideas of life after death—a tale you may want to read over again to catch all its implications. 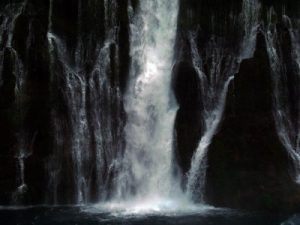 In The Abhorsen Chronicles, Death is portrayed as a river. This river carries spirits though nine precincts, each more dangerous than the last, until they reach their final end. The river doesn’t distinguish between good spirits and bad, but, if spirits linger in the river too long, they become twisted versions of what they were in Life.

And yet, when Lirael walks all the way to the Ninth Precinct in the second book of the series, this is what she finds:

“The Ninth Precinct was utterly different from the other parts of Death… The familiar tug of the river at [Lirael’s] knees disappeared as the current faded away. The river now only splashed gently round her ankles, and the water was warm…

For the first time, she could also look up and see more than a grey, depressing blur. Much more. There was a sky above her, a night sky so thick with stars that they overlapped and merged to form one unimaginably vast and luminous cloud. There were no distinguishable constellations, no patterns to pick out. Just a multitude of stars, casting a light as bright as but softer than the living world’s sun.”

Lirael learns that the end is nothing to be afraid of, which is a refreshing perspective on the afterlife. 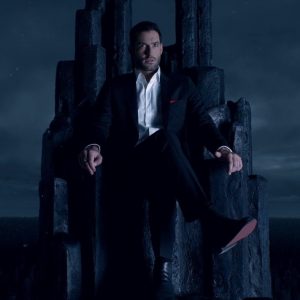 In this TV series, the Devil takes a vacation from hell and retires to Earth, where he opens up a nightclub and helps Detective Chloe Decker solve murders.

While this series starts with the traditional concepts of good and bad souls, what makes it interesting is how the souls end up where they do. In Lucifer, hell is all about guilt. If a person feels guilty about something when they die—real, bone-deep guilt—their soul ends up in hell, where it’s locked in a “hell-loop” and tortured with the manifestations of its guilt for eternity.

This concept raises some puzzling questions, like what happens to souls who feel misplaced guilt? Do victims of trauma who feel guilt about their circumstances end up in hell? Do psychopaths, who feel no guilt, end up in heaven? The potential answers are horrifying.

So far, the show hasn’t answered this question, but that hasn’t stopped fanfic writers from doing their best to figure it out. 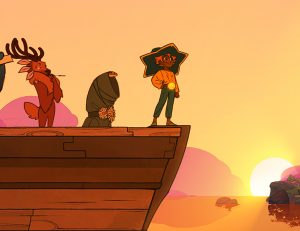 In this video game, you play Stella, a ferrymaster who sails spirits through the afterlife until they reach their final rest at the Everdoor. While you ferry the spirits, you also take care of them: you build them houses, cook them food, and help them with their unfinished business.

As you ferry the spirits, you grow attached to them, sometimes delaying the journey to the Everdoor as long as possible because you don’t want to see them go. Gwen gives the best hugs; Stanley’s curiosity is infectious; Buck’s love of tabletop RPGs makes you grin. Sailing the spirits to their final destination is bittersweet. They leave you with Spirit Flowers when they depart, which allow you to upgrade your boat, and their houses remain, reminding you of their stories. It’s a sweet, relaxing game that treats the subject of death with compassion. 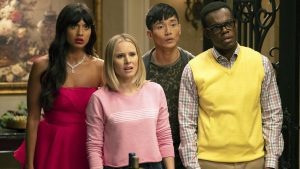 I can’t write a blog post about the afterlife and not mention the show that built itself around the very concept. This series follow four humans—Eleanor, Chidi, Tahani, and Jason—who are tricked into believing they went to the Good Place when they died, when they’re actually in a Bad Place experiment to see if they’ll torture each other for eternity. The experiment fails because the Bad Place architect, Michael, made a crucial error: the humans helped each other become better people.

As the series progresses, Michael learns more about what it means to be human from the four characters. He starts formulating a theory about the whole afterlife system, in which humans receive points for their good actions and lose points for their bad actions. In Season Three, he has a breakthrough and discovers that the point system didn’t keep up with the changes in humanity. A man gives roses to his grandmother in 1800s and makes her happy; he receives a lot of points because he picks them himself and walks them over to her house. A man does the same thing in the 2000s and loses points because he buys the roses, which means supporting money-guzzling CEOs who use unpaid labour. In essence, no humans have gotten into the Good Place for hundreds of years because being a good person has gotten infinitely harder.

In the final season, Michael and the four protagonists set out to reinvent the afterlife system so that all humans can have a chance to get into the Good Place.

This show poses a lot of questions about what it means to be a good person. Its central message—that people grow when they have love and support—is also one I think we all need to hear.

Does your fantasy or sci-fi work include an afterlife? How does it work, and how does it differ from traditional depictions?