Abandoning the Blind: Depravity and Hope During a Pandemic

In his 1995 speculative work, Blindness, José Saramago explores what would happen if everyone suddenly lost their sight. One day, a man sitting in his car goes blind. His wife takes him to see a doctor, who can’t find anything wrong with his eyes. Later that night, the doctor goes blind. Then everyone who was in the doctor’s waiting room. The doctor alerts the director at his hospital, who tells the Ministry, and the government quickly concocts a plan to quarantine everyone who is blind, along with everyone who has had contact with a blind person, in an old asylum until further notice.

The first arrivals are given a list of fifteen rules, which include: anyone attempting to leave will be shot by the armed soldiers guarding the asylum; no help will come in the event of disease or fire; and, if someone dies, they must bury the corpse in the yard. The first arrivals realize that they must stick together to have any chance of surviving.

There is only one person who doesn’t go blind: the doctor’s wife, who feigns blindness so she can accompany her husband to the asylum. The story is told through her eyes as she helps her husband and the others in her ward. She alone sees the horrors that take place there.

The Ministry’s immediate response to the sudden mass blindness is cruel. The Minister and President of Security settle on the asylum because it has two wings: one for the blind and one for those who are suspected of having the disease. If someone who is suspected of having the disease becomes blind, they can simply be transferred to the other wing. But the Minister brings up a problem: “We shall find ourselves obliged to put staff there to supervise the transfers, and I doubt whether we will be able to count on volunteers.”

The President responds by saying, “I doubt whether that would be necessary, Minister, should anyone suspected of infection turn blind, as will naturally happen sooner or later, you may be sure, Minister, that the others who still have their sight, will turn him out at once.”

The other wards fill up beyond capacity. One ward of men takes over all of the food and demands payment from the others if they want to eat. Another ward guards the water. With no one employed to take care of cleaning, the toilets back up and the patients stop using the bathrooms all together. The asylum becomes a hell on Earth, and it’s only when a fire starts, and the doctor’s wife sees that there are no more armed guards, that she and the others in her care escape. As they wander the streets, they discover that the entire city has become blind while they were forgotten in the asylum.

Twenty-five years after the release of this book, we are facing a global pandemic. When I originally wrote this article in 2015, I asked the question: “What would happen if we encountered a new disease? Would we be quick to help, or would we let fear and hysteria win out?” Well, now I know.

The government response to COVID-19 has been varied. Some countries, like New Zealand, were swift to curb the virus by implementing severe quarantine measures. Others, like the U.S., placed economic stability over the health of its citizens and allowed public spaces to remain open. The death counts are telling: while New Zealand only has 24 deaths (as of this writing), the U.S. is reporting upwards of 194,000. Canada’s response was middling, with an intense lockdown in the beginning months, followed by a slow reopening in phases, and just under 10,000 deaths to show for it.

The citizen response to the pandemic has also been varied. While most adhere to doctor-supported safety mandates, like wearing masks and washing hands frequently, a very loud group of dissenters has taken it upon themselves to discredit the science community and assert their right to personal choice over public health.

But, more than that, this pandemic has exposed the cruelty of our systems in a way nothing has before. We’ve heard stories of the abysmal conditions in personal-care homes; of nurses creating their own personal protective equipment out of garbage bags because there aren’t any available; of billionaires raking in the money while others slip further into poverty. And we’ve seen the systemic racism that runs deep in our police institutions, when the death of George Floyd at the hands of police sparked Black Lives Matter protests around the world. On top of that, we seem to have forgotten that our climate is nearing the point of its demise. Six months into the pandemic, nothing is the same. Nothing about this is fair, and nothing feels like it’s going to get better.

In the novel, the doctor’s wife encounters a writer who has kept up his craft, in spite of his blindness; he places his loose paper on a soft surface so that his pen leaves indents, and, after he takes a break, he feels for those indents so that he knows where to start again. He is a bright spot of hope in the otherwise bleak narrative because he hasn’t given up on himself or his city.

Likewise, I’ve seen glimmers of goodness amidst the pandemic: neighbours caring for each other; families decorating their windows with pictures and messages of hope; professional soccer players leading workouts from their balconies for people in quarantine. All of these seem small in the face of systemic corruption, but they are helpful reminders that humanity can be good when it so chooses.

Blindness ends with a cleansing rainstorm, after which the characters regain their eyesight. I don’t know when or how this pandemic is going to end. But it’s shown me that, even after we get the vaccine scientists are working so hard to create, we have so far to go to address the injustices in our government, police, and consumer capitalist systems. I don’t need a book to tell me what happens when everyone loses their eyesight; those of us with privilege are blind to what people of colour, LGBTQ2 folks, and those living in poverty already know. It’s time for us to wake up. 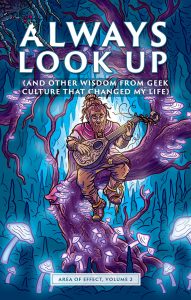 This article, written by Kyla Neufeld, is from Mythos & Ink’s anthology, Always Look Up (and Other Wisdom from Geek Culture that Changed My Life) — Area of Effect, Volume 2.

Compiled of essays by various authors on TV, movies, video games, and anime, Always Look Up asks questions like the following: How do you respond to grief when it threatens to eat you up? (Pro tip: not like Sam and Dean in Supernatural). How do the cylons in Battlestar Galactica inform our humanity? What does Mario Kart have to say about death? How does goodness healing disability in fairy tales impact our culture’s understanding of chronic illness?

Challenge yourself with these thought experiments or use the bite-sized articles in the book as discussion points with other pop culture aficionados like yourself.