Infinite Universe is launching on May 8, 2021, during the online event, SO YOU WANT TO MAKE A GRAPHIC NOVEL: 5 COMIC CREATOR DISCUSS LAUNCHING THEIR BOOKS. Attend the event for a Q&A with Lyndon, Steven, and several other comic creators. There will also be some awesome giveaways of their graphic novels and art prints! View the event schedule here.

Coming soon from Mythos & Ink: Infinite Universe, a sci-fi graphic novel featuring a group of superhuman explorers and their quest to find a survivable planet.

Today we’re having a chat with the graphic novel’s creators, Lyndon Radchenka and Steven Kaul. Huge thanks to these two for stopping by!

1. What inspired you to write Infinite Universe?

Lyndon: “That’s an easy one: Steven did. Steven and I have known each other for about ten years now; back in 2015, while attending San Diego Comic Con together, we joked about making a comic together, as I had a degree in English, and he had his in Fine Arts. It wasn’t until 2017, though, that Steven approached me seriously about working on a project together.

“He didn’t come empty-handed either, bringing to the table the concept of a giant space battle and a story-telling character that was completely uninterested in the fight going on.

“From there, the two of us collaborated fully on the development of the Infinite Universe story, taking that idea of a huge battle and adding human elements and conflict to give that conflict some meaning that would be interesting to write (and read, hopefully!).”

2. What inspired the art style?

Steven: “This is easy, it was our first book! I was inspired by getting it done. Whatever style came out as I made my myriad of mistakes is what it would be. If you spend too much time ‘developing your style’ and not doing the work, you will never finish.

“Also, Jack Kirby. I have developed my techniques based on my theory of how that man pulled off 72 pages a month. Make it random, but look intentional.” 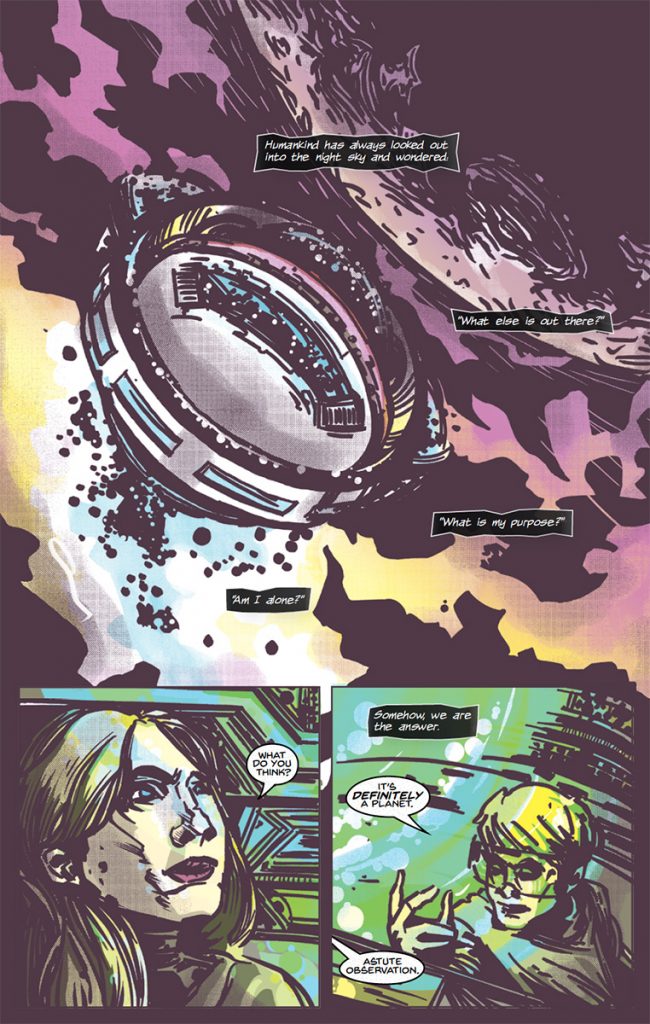 3. What is your collaborative process? Do you brainstorm together? Is it writing first, drawings second, or the reverse?

Lyndon: “Steven’s and my process is about fully collaborating. When it comes to a project that you’re going to spend parts of your lives on, it’s fundamentally important that everyone involved is invested in it, and that’s why it’s so important to build the foundation of the idea around the things both of us were interested in.

“Steven and I always begin by story-breaking/outlining the plot in broad strikes together. We decide on the moments that we want the story to touch on, and we solidify how we want it to feel (this one is super important). From there, I run off and begin scripting the story while Steven starts doing concept art for the characters. Once the first draft of the script is done, we go through it to make sure we’re both happy with how it’s come out before going on to art.

“Steven works on the art, and when the pages begin to take shape, I go in and letter over the inks (or the colours, if they’re done,) and re-work the script to be more in-tune with the artwork, editing and cutting as needed.”

4. What is the most difficult part of your artistic process?

Lyndon: “I think the heaviest lifting for me comes at the beginning, which is solving all of the problems that naturally crop up when breaking a story but also are a natural part of making a story work. Really though, the difficult part of the process is waiting for the artwork to roll in. There’s nothing like seeing an idea illustrated on a page. Think of it like Christmas morning, but it happens every time new art hits your inbox.”

Steven: “Getting going. These days I’ve been way more consistent working every possible day I can, but with Infinite Universe, I would burn out and take involuntary breaks, then would have to rev my engine up again as my page frequency had dropped through the floor.”

5. What is the first comic that you fell in love with?

Lyndon: “The first comic that I loved was Batman from Scott Snyder and Greg Capullo. Unlike a lot of the comic makers I know, I didn’t actually read a lot of comics growing up. I watched Batman: The Animated Series, Batman Beyond, and the animated Spider-Man cartoon in the 90’s, but I was very much a product of other forms of media. I didn’t start reading comics seriously until 2011, when I was 18, and I did so because I wanted to learn more about the source material of the characters I loved. It felt like the characters in comics were more real, or true, or whatever word you want to use to describe my pretentious idea that the characters in the comics were somehow better than the interpretations of them that have been portrayed in other forms of media.”

Steven: “I buy comics for the art, to see how everyone else builds their panels, to learn. But to pick a book based on everything I love comics for, it would be Head Lopper by Andrew MacLean. The guy is amazing, minimal dialogue, easy to follow but creative action. So good.”

6. What are your biggest fandoms?

Lyndon: “Ten years [after I discovered them], my biggest fandom now is unquestionably comic books. I’ve made it a higher priority to branch out from the Big Two into indie books, but a good comic is still what I enjoy the most. In terms of pop culture series, I still carry the appreciation I did for series like Harry Potter and The Lord of the Rings, which I read during childhood. But if there’s any series that has really moved me over the last few years, it’s actually been reading through the complete run of Calvin and Hobbes.”

Steven: “I have a broad spectrum of fandoms. But I am truly a fan of how things are made. Which brings me to science fiction film for sure. It could be the worst movie in the world, but If I have an idea of the work that went into building everything I am seeing in camera (The Mandalorian, for example) I am half way to crying.

“The same goes for comics, in Strange Adventures, Gerads does his backgrounds traditionally and his characters digitally, and it’s mind blowing.

“I’m a fan of technique and process.” 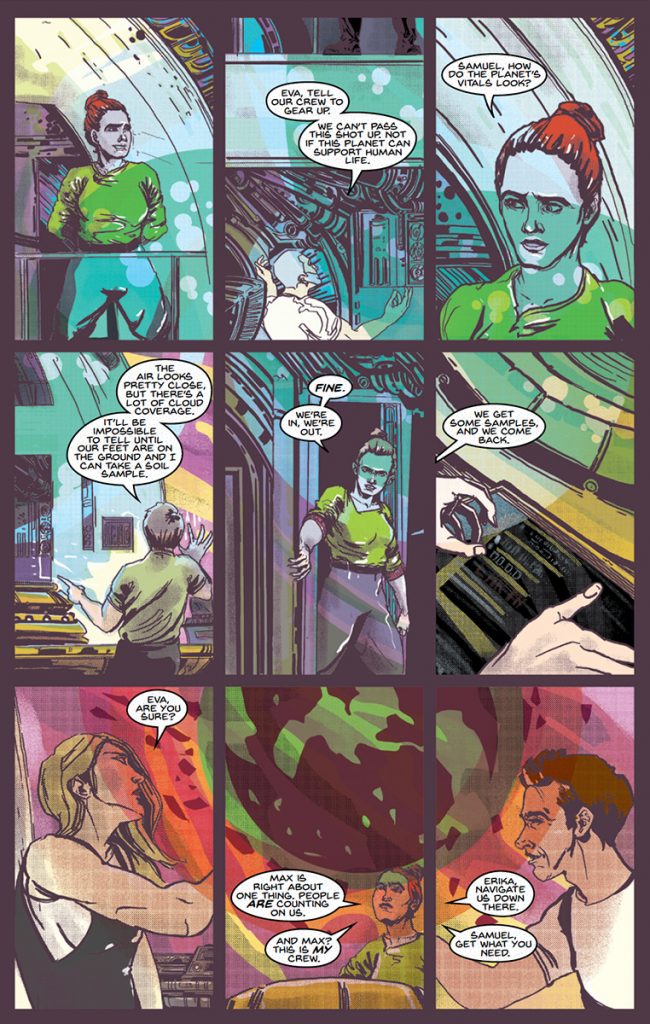 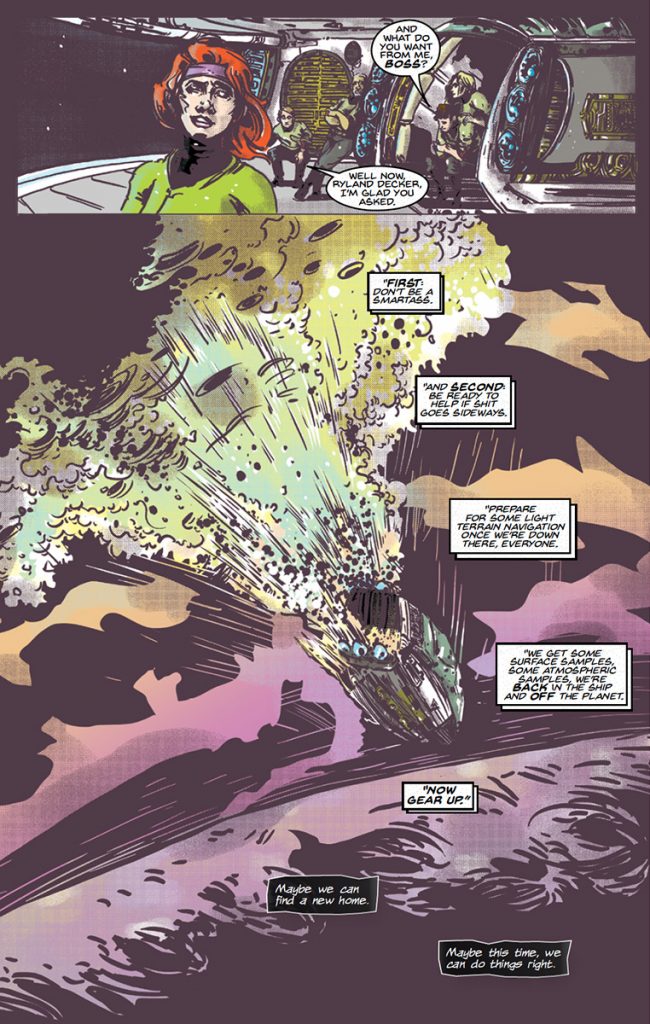 7. What advice would you give to an aspiring graphic novel author?

Lyndon: “Read books. Not just comics, but all kinds of books. Read classics. Read non-fiction. Read anything that is going to grow your mind and give you something that you want to talk about. Movies and TV are good for this, too, and there’s a lot more about cinema that’s similar to comics than many people realize, but the biggest advice I can give anyone who wants to do this kind of work is the same tried and true advice that I’ve received from others: keep making things that you love, and ignore all the outside noise. Ignore whatever the popular fad is and ignore any person who might discourage you. If there’s anything that seems true of human history, all the way back to Greek theatre, it’s that people love a good story, and that’s what you’re trying to give them. As long as you keep trying to do that, you’ll be fine.

8. What advice would you give to an aspiring graphic novel artist?

Steven: “Do the work. If you can’t write, find a friend who is as obsessed as you.

“Get a full-time job. School is useless for this. My full name is Steven Kaul, BFA. If you do some simple math and add together a 40 hour work week with a liberal amount of time for chores, fitness, food, chilling out and 8 hrs a night for sleep. You probably still have 40 hrs a week to work on your graphic novel.”

9. What are the writing/drawing tools you couldn't do without?

Lyndon: “The most important writing tool that I cannot live without is the people around me. Being a writer is a solitary profession, even as the world changes and we become more connected. It’s in people that I find my inspiration, my ideas, and my motivation.

The actual act of writing can use anything from a pencil to a keyboard (I prefer the latter, but to each their own,) but the most important thing in writing, to me, is having something to say, and I know that without other people in my life, I would quickly run out of observations, mannerisms, and situations that I could co-opt into my own stories, and I’m far too uncreative to come up with that sense of truth on my own.”

Steven: “Though I could do without it, my Wacom tablet is the greatest purchase ever.”

10. Will we see more Infinite Universe sagas in the future?

Lyndon: “Steven and I have been talking about the future of Infinite Universe since the book first came out, and even since then it’s been incredible to see how far we’ve come as artists. We don’t believe in sequels purely for the sake of sequels, so if/when we return to the story, we want to know that it will have something to say and really give the reader the pay-off they deserve for sticking with us.

So I can’t answer that question definitively, but I can tell you that Steven and I love those characters and the world that we’ve built, and if you see an Infinite Univer2e announced, buckle up, because it’s going to be worth the ride.”

Despite enjoying the “classics” of Hemingway, Fitzgerald, and Dumas, Lyndon was drawn back to comics. Lyndon became active in the comic convention scene in 2013, and was quickly enchanted by the passion and support of the indie comics community.

If you were to ask him when he was younger what he wanted to do when he grew up, Steven Kaul would hit you with “I want to draw Spider-Man,” or “I want to be a starship Captain.” Having already gotten the latter out of the way, he decided to attend the Fine Arts program at the University of Manitoba, from which he graduated in 2013. It was a degree that taught him a great deal about art, most of which he does not use today.

Running mostly on a plethora of self-taught skills focusing on digital creation, Steven, with writing partner Lyndon Radchenka, has embarked on the process of making his first comic since the sixth grade.