How to Craft Characters with Disabilities

Why is it important to include characters with disabilities and illnesses in our stories? For the same reason it’s crucial to feature characters of various races, sexes, genders, and minorities: because people want to see themselves in the stories they read and representation matters.

Contrary to popular practice, you do not need to write a book that entirely revolves around an illness or disability in order to include those characters. If that is the book you want to write, go for it, but don’t let your genre keep you from representing a wide variety of characters, including those who suffer from health problems. I’ve read about wonderful characters with illnesses in science fiction, fantasy, mystery, crime, fairy tales, action, drama, and more.

There are, however, a few traps that writers can fall into when creating characters with disabilities that do a disservice to these minorities. The purpose of this resource is to help you avoid them. . . . 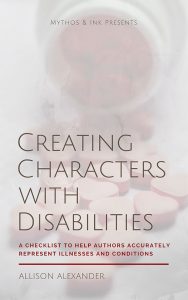 Read the rest of this resource by signing up for my newsletter! I’ve made a handy PDF with a checklist you can go through when crafting characters with disabilities. It also includes a character study on Toph Beifong from Avatar: The Last Airbender to demonstrate how characters with disabilities do not have to be left on the sidelines but can be right in the middle of the action.