Religion as a Colonizing Force (Fantasy and Religion, Part Two)

Spoilers for Marion Zimmer Bradley’s The Mists of Avalon.

In this two-part series (read part one here), I’m exploring how fantasy books portray believers and non-believers and the importance of keeping faith versus having an open mind. In today’s post, I’m looking at The Mists of Avalon by Marion Zimmer Bradley.

The Women Tell Their Story 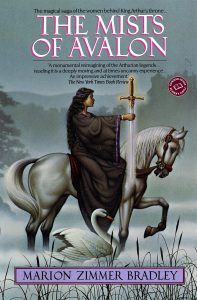 Most adaptations of Arthurian legends focus on Arthur, his knights, and Merlin. Guinevere and Morgan le Fay appear as well, but often as side characters: Guinevere as a love interest and Morgan as a villain.

But, in The Mists of Avalon, these heroines finally get a chance to tell their story. Guinevere and Morgan, who are Gwenhwyfar and Morgaine in this book, both prove to be complex and multi-faceted. Morgaine is more than a hateful sorceress, and Gwenhwyfar is more than an adulteress.

So, while I was expecting a close look into the lives of these women when I picked up the book, I was pleasantly surprised to find a secondary conflict: the undercurrent of tension between a colonizing Christianity and a retreating Mother Goddess.

Mists takes place in a fictional Britain fresh after the fall of the Roman Empire. In this land, Christianity is still a young religion, but the people of Avalon fear its potential to become great. The Lady of the Lake, Vivienne, sees how the isle of Avalon is pulling away from the world as people start to forsake its ways. She works with Merlin to orchestrate Arthur’s birth in hopes of keeping it that way; they hope he will be the king who brings the people back to Avalon.

The religion of the Mother Goddess could not be more different from Christianity. It’s personified by a female deity, while Christianity is represented by a male. Its highest office is held by the High Priestess, while Christianity is led by the Bishop. It treats women as equal to men, while Christianity teaches that women are inferior to men. In Avalon, women learn to read, write, play music, and ask questions. In Britain, the priests teach women that they are evil; they must listen to their fathers and submit to their husbands.

The people of Avalon also believe that all gods are the Goddess. To them, it doesn’t matter who one worships, for all worship is claimed by the Goddess.

And so we have the conflict between the “feminine” pagan religion and the “masculine” Christianity: one religion retreating and the other pushing it out. Over the course of this book, pagan rituals, like the Beltane Rites, fall away as Christian versions take their place. Characters’ attitudes toward Avalon change from reverence to disinterest to hostility. And Avalon faithfully struggles to hold on.

No two characters embody this conflict more than Morgaine and Gwenhwyfar.

Morgaine is Arthur’s older half-sister, born to their mother Igraine, who is also Vivienne’s sister and a priestess in her own right. After Igraine’s first husband dies, she marries Uther on Vivienne’s orders, and she gives birth to Arthur. Morgaine grows up in Uther’s court, but she quickly finds that she has no place there: Uther tolerates her presence for the sake of his wife, but Igraine doesn’t pay much attention to her, focusing instead on Arthur.

Because of this, Vivienne takes Morgaine to Avalon when she’s eleven years old. Morgaine thrives in Avalon, where she trains as a priestess and develops her powers of the Sight.

All of that changes when she turns eighteen. At that time, believing it to be the will of the Goddess, Vivienne chooses Morgaine for the role of the Maiden Huntress in the Great Marriage. In this fertility rite, she copulates with the Horned One. She fulfills her role, dressed in the regalia of the Maiden Huntress. But, the next morning, when she wakes up, she realizes that the Horned One is none other than her brother, who was only taking part in the ritual to solidify his claim to the throne. They are both ashamed and agree never to speak of it again.

Two months later, Morgaine discovers that she’s pregnant. She feels betrayed by Vivienne. She leaves Avalon and hides out with her Aunt Morgause, the queen of Orkney, until she gives birth to her son, Gwydion (later called Mordred). Then, she leaves him in the care of her aunt.

So begins her years of exile. But, though she turns away from Avalon, she keeps the teachings of the Goddess. She continually flouts societal norms: she asserts her power, remains unmarried, and takes lovers. Eventually, she longs to return to Avalon, as she realizes that she was meant to fully be a priestess.

Decades after forsaking Avalon, she makes her way back to her calling:

“…I learned again to count sun tides from equinox to solstice and back to equinox again… it was years before I could feel them running in my blood again, or know a hairline’s difference where on the horizon moon or sun would rise or set for the salutations I learned again to make. Again, late at night while the household lay sleeping round me, I would study the stars, letting their influence move in my blood as they wheeled and swung around me…

With the gates of vision thus opened I could seek and dare the very presence of the Goddess, begging the repronounce what I had forsworn. I had no fear that I would be cast forth again. It was she who sent me this gift that I might seek again her presence.”

Morgaine’s journey to faith takes her down a long road—one that leads back to Avalon in the arms of her Goddess, where she knows she’s loved.

Like Morgaine, Gwenhwyfar is pious—but for very different reasons. Schooled in a nunnery, Gwenhwyfar absorbed the teachings of Christianity at a young age. She has very little book knowledge, but instead knows how to manage a household, as fits a king’s daughter.

She marries Arthur when she’s eighteen—sold to him by her father with a dowry of one hundred horses for Arthur’s army. Though she’s afraid to be High Queen, and she’s already in love with Lancelet, she does what she’s told. She keeps Arthur’s house and performs her courtly duties, doing everything she can to be a loyal, Christian wife.

As High Queen, Gwenhwyfar wants to give Arthur an heir, but she struggles to conceive. Because her faith is rooted in expectation and blame, rather than love and acceptance, she becomes convinced she’s barren because she’s a sinner. Her desperation grows each time she miscarries.

After her third miscarriage, she decides that God must be punishing both her and Arthur for not leading a Christian kingdom—Arthur is content to let his subjects worship whomever they choose.

On the night before Arthur is to ride into battle against the Saxons, Gwenhwyfar convinces him to put away the Pendragon banner and carry the banner of Jesus Christ and the Virgin Mary.

“[Gwenhwyfar] bent her head and said bitterly, ‘…I cannot even persuade you to put away that pagan banner and raise the cross of Christ… And no doubt God knows your heart, since God will not let you ride forth into battle believing that any son of yours shall rule this land, because you have not yet resolved to make this a Christian land…’

‘I tell you, dear lady, before God, I believe it not, that God works in such ways, nor that it matter so much what banner we carry. But if it matters thus to you—‘ [Arthur] paused and swallowed. ‘Gwenhwyfar, I cannot bear to see you in such distress. If I bear this banner of Christ and the Virgin into battle over my troops, will you cease to mourn, and pray to God for me with your best heart?’”

Gwenhwyfar is the driving force behind Britain leaving Avalon behind, as she convinces Arthur to put a stop to the pagan rituals. She doesn’t do it out of love for God, but rather out of obligation, shame, and guilt.

Morgaine and Gwenhwyfar don’t start out as enemies. In fact, they start out as friends; Morgaine even serves as one of Gwenhwyfar’s ladies for several years.

But, Gwenhwyfar comes to see Morgaine as the symbol of everything she’s been taught to hate. Morgaine doesn’t submit herself to any man, and Gwenhwyfar sees this as a mockery of God. Morgaine is also learned, which Gwenhwyfar thinks is improper for a lady. In one part of the book, Gwenhwyfar curses Morgaine’s knowledge even as she acknowledges that Morgaine kept everyone healthy over winter because of her ability to make medicines.

The way Gwenhwyfar views Morgaine directly parallels Britain’s trajectory from pagan to Christian: the more Christian Britain becomes, the more Gwenhwyfar hates Morgaine. She’s jealous of Morgaine’s freedom. In a world that doesn’t give power to women, Morgaine takes it anyway. And rather than follow Morgaine’s example, Gwenhwyfar—trapped in a marriage she doesn’t want—chooses to condemn her.

The book proper ends with Gwenhwyfar cloistered in an abbey and Morgaine holding a dying Arthur on the shores of Avalon, completely sundered from the world. But, in the epilogue, Morgaine visits the abbey to pay homage to Vivienne’s tomb. There, she meets a young novice, who says to her: “Sometimes when you are alone with the Holy Mother, she can make things clear to you.”

Of course, the novice is referring to the Virgin Mary, but this leads Morgaine to an important realization: “I did the Mother’s work in Avalon until at last those who came after us might bring her into this world. I did not fail. I did what she had given me to do.”

Avalon is gone, but not forever.

When building religions into your own world, take inspiration from The Mists of Avalon and consider how conflict occurs within the religion and without. Devout piety can result in heated rifts, even wars, which can fuel character backstories and a world’s history.

How does religious conflict fit into your world? Do believers tolerate other religions, or do they work to overthrow those who follow other gods? Does a religion lost to time come back? Who are the religion’s strongest proponents? Answer these questions to provide interesting backstory and commentary to your work.

Kyla Neufeld is a poet, writer, and editor who lives in Winnipeg, Treaty One Territory, with her Sith Lord husband and Nazgûl daughter. She has a wide range of editing experience from working with magazines and local publishing companies.

Kyla has been a geek since she read The Lord of the Rings at 13. Since then, she’s branched out to many sci-fi/fantasy worlds, including Hogwarts, Sunnydale, and the Old Kingdom. She’s interested in the intersections of geek culture, feminism, and social justice. She’s also a fan of mythology and is currently working on a series of poems about Norse creatures.

We’re continuing in our series on the Netflix show Shadow and Bone, which is based on novels by Leigh Bardugo! Our topics today: magic and societal structure. What is the distinction between “small science” and magic? What is magic’s narrative purpose in the show? How are the societies structured and how does considering structure provide ample opportunities for inserting conflict into a story’s narrative?