Many members of our Patreon and Discord community are creatives themselves, and we like to celebrate their projects with them. Today, I’m excited to announce the launch of THRUD by Canadian artist Zach Schuster. I’ve personally read THRUD and I looooved it. The Norse mythology combined with a mute character and the Legend of Zelda vibes hit the spot for me. Read more about THRUD in an interview with its creator below and check out the sample pages! 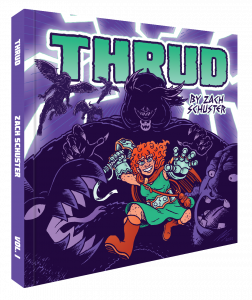 1. Tell us a bit about you and your upcoming graphic novel, THRUD!

I am an illustrator from Calgary, AB, and I love comics and board games. THRUD: Volume I is about a mute girl named Thrud and her companion Kvasir, a talking puddle of god-spit she carries around in a flask with a little face on it. It’s told by Kvasir in a series of short non-sequential stories.

2. What is the mythology that inspired THRUD?

Norse! It’s been my favourite since I was a kid reading Thor comics. I always felt like I should have a better reason than that, at least until Neil Gaiman said the same thing in the foreword to his book Norse Mythology. For THRUD I made sure to avoid Thor, Odin, and Loki as much as possible and stick to some of the more obscure stories and characters.

3. What was your favourite scene to write in the book?

The early stories were a blast to write because of all the cool stuff I was making up as I went. The later stuff was a different kind of fun, since I had to write myself out of corners I had written myself into earlier. My favorite comic is the third one, “The Return of the Valkyries,” for several reasons. I got to riff on the Weird Sisters from Macbeth, and as a result the whole vibe felt Hellboy-esque. Also, in the background, I set up some cool stuff I don’t fully reveal until later, but I don’t want to spoil anything else for now!

4. We love representations of disability in fiction. How does Thrud’s muteness impact her story?

I originally based Thrud and Kvasir off of Link and Navi from The Legend of Zelda. I have always loved how Link’s heroic actions showed off his character without words and let you immerse yourself in the game, and how his sidekicks are typically chatterboxes that compliment his strengths on their adventure. Thrud needs Kvasir to help communicate with the world, and Kvasir needs Thrud to get around, and between the two of them they can handle pretty much whatever the world throws at them! Towards the end I also showed that Thrud learned some sign language once she found other people to communicate with, because it’s always been an interest of mine. (I even took an ASL class last year!) I want to do more with that in future stories for sure. 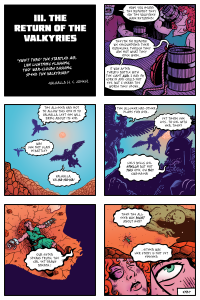 5. What do you appreciate about being able to write and illustrate your own stories?

I honestly was not feeling very confident as a writer before starting THRUD, which is why I wanted to use an established mythos as a base. It was good I was doing this one myself, though, as no sane writer (ha!) would have liked the schedule I made it on. I was making it up as I went along in weird, inconsistent spurts in between other projects.

My favourite comic of all time would have to be Hellboy and my favorite game series is The Legend of Zelda, and THRUD clearly draws from both of those things. Avatar: The Last Airbender is my favourite show, and while it may not be as much of a direct influence, I hope a little of it shone through anyway!

7. If you could choose one of these Norse creatures to accompany you on a quest, which would it be and why? Jörmungandr (the serpent), Fenrir (the wolf), or Sleipnir (the 8-legged horse)?

Sleipnir, easily the coolest ride in the nine realms! Plus, it’s the only one of them that isn’t specifically said to die at Ragnarok, so it’s the best bet long-term, too.

8. Where can readers buy THRUD?

It’s available on Kickstarter! The campaign runs from August 3rd to August 28th, and it’s going to be the best chance to get it if you aren’t in Calgary.

You never knew your life was missing a story about a mute girl and her talking puddle of god-spit, did you? But now that you do, off to Kickstarter with you.

Searching for the answer to a mystery? Need a rare, magic spell? Is what you know about history not adding up? Well, then you obviously need to make a trip to the library full of secrets, for it holds the answers to life, the universe, and everything. But be careful, because the library is usually dangerous, potentially an inescapable labyrinth or guarded by magical beings that only let the one who is worthy read its books.

2.16 – Library Full of Secrets
2.15 – Artificial Intelligence
2.14 – Evil Has Been Locked Away For Centuries
2.13 – The Plants Have Risen Up Against Us
2.12 – The Government is Out to Get Us
2.11 Clones are People, Too
2.10 A Conversation with the Authors of Making Myths and Magic
2.09 There's Often a Reason that Power is Forbidden
2.08 What if Pizza Was Never Invented
2.07 Everything is a Simulation
Search Results placeholder