Since it’s a time to watch Netflix, play video games, read books, and otherwise distract ourselves from the world’s terrors, I thought it would be fun to do some blog posts about the books I return to again and again. Here are ten books I would bring to the apocalypse (or to a desert island, if the former feels to real right now), and heartily recommend to you readers who enjoy science fiction and fantasy. 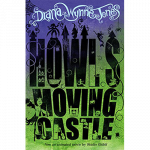 I just keep coming back to this book because it’s so playful and clever. Sometimes it’s nice to read a quiet fantasy that isn’t about the world ending.

Sophie has the great misfortune of being the eldest of three daughters, destined to fail miserably should she ever leave home to seek her fate. But when she unwittingly attracts the ire of the Witch of the Waste, Sophie finds herself under a horrid spell that transforms her into an old lady. Her only chance at breaking it lies in the ever-moving castle in the hills: the Wizard Howl’s castle. To untangle the enchantment, Sophie must handle the heartless Howl, strike a bargain with a fire demon, and meet the Witch of the Waste head-on. Along the way, she discovers that there’s far more to Howl—and herself—than first meets the eye. (Synopsis from Goodreads.) 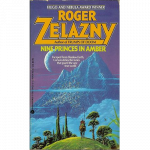 2. Nine Princes in Amber (The Chronicles of Amber #1) by Roger Zelazny

A lesser known oldie, I just love the magic system in this series. The princes have the ability to manipulate the worlds around them and can communicate with each other using a deck of cards.

Amber, the one real world, wherein all others, including our own Earth, are but Shadows. Amber burns in Corwin’s blood. Exiled on Shadow Earth for centuries, the prince is about to return to Amber to make a mad and desperate rush upon the throne. From Arden to the blood-slippery Stairway into the Sea, the air is electrified with the powers of Eric, Random, Bleys, Caine, and all the princes of Amber whom Corwin must overcome. Yet, his savage path is blocked and guarded by eerie structures beyond imagining; impossible realities forged by demonic assassins and staggering horrors to challenge the might of Corwin’s superhuman fury.’ to ‘Awakening in an Earth hospital unable to remember who he is or where he came from, Corwin is amazed to learn that he is one of the sons of Oberon, King of Amber, and is the rightful successor to the crown in a parallel world. (Synopsis from Goodreads.) 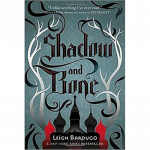 While everyone’s hyped up about Bardugo’s other books, namely Six of Crows and Ninth House, I really enjoy this fantasy story about a woman who doesn’t feel like she’s good at anything and then discovers she’s got the most unique magical power of all.

Surrounded by enemies, the once-great nation of Ravka has been torn in two by the Shadow Fold, a swath of near impenetrable darkness crawling with monsters who feast on human flesh. Now its fate may rest on the shoulders of one lonely refugee.

Alina Starkov has never been good at anything. But when her regiment is attacked on the Fold and her best friend is brutally injured, Alina reveals a dormant power that saves his life—a power that could be the key to setting her war-ravaged country free. Wrenched from everything she knows, Alina is whisked away to the royal court to be trained as a member of the Grisha, the magical elite led by the mysterious Darkling.

Yet nothing in this lavish world is what it seems. With darkness looming and an entire kingdom depending on her untamed power, Alina will have to confront the secrets of the Grisha . . . and the secrets of her heart. (Synopsis from Goodreads.) 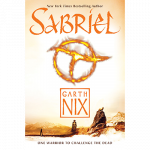 This is the book I recommend to everybody. Sabriel is such a lovely character, and it’s neat to see necromancy magic being used for good instead of evil.

Sent to a boarding school in Ancelstierre as a young child, Sabriel has had little experience with the random power of Free Magic or the Dead who refuse to stay dead in the Old Kingdom. But during her final semester, her father, the Abhorsen, goes missing, and Sabriel knows she must enter the Old Kingdom to find him.

With Sabriel, the first installment in the Abhorsen series, Garth Nix exploded onto the fantasy scene as a rising star, in a novel that takes readers to a world where the line between the living and the dead isn’t always clear—and sometimes disappears altogether. (Synopsis from Goodreads.) 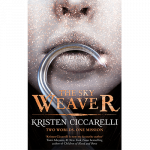 Each of the books in this series can stand alone and they’re all good, but this one’s my favourite. I’m a sucker for the “enemies to lovers” trope, I guess.

At the end of one world, there always lies another.

Safire, a soldier, knows her role in this world is to serve the King of Firgaard—helping to maintain the peace in her oft-troubled nation.

Eris, a deadly pirate, has no such conviction. Known as the Death Dancer for her ability to evade even the most determined of pursuers, she possesses a superhuman power to move between worlds.

When one can roam from dimension to dimension, can one ever be home? Can love and loyalty truly exist?

Now Safire and Eris—sworn enemies—find themselves on a common mission: to find Asha, the last Namsara. From the port city of Darmoor to the fabled faraway Star Isles, their search and their stories become woven ever more tightly together as they discover the uncertain fate they’re hurtling towards may just be a shared one. In this world—and the next. 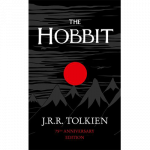 If you’re like me, this book comes with a lot of nostalgia. I watched the cartoon movie a lot when I was a kid, too (sing along with me: “The greatest adventure, is what lies ahead…”). FYI, the book is nothing like the recent movies.

Written for J.R.R. Tolkien’s own children, The Hobbit met with instant critical acclaim when it was first published in 1937. Now recognized as a timeless classic, this introduction to the hobbit Bilbo Baggins, the wizard Gandalf, Gollum, and the spectacular world of Middle-earth recounts of the adventures of a reluctant hero, a powerful and dangerous ring, and the cruel dragon Smaug the Magnificent. (Synopsis from Goodreads.) 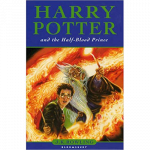 I debated about which Harry Potter I would bring to the apocalypse. They’re all so good! I could also go with number three or number four… ah, I’ll just bring ’em all.

When Harry Potter and the Half-Blood Prince opens, the war against Voldemort has begun. The Wizarding world has split down the middle, and as the casualties mount, the effects even spill over onto the Muggles. Dumbledore is away from Hogwarts for long periods, and the Order of the Phoenix has suffered grievous losses. And yet, as in all wars, life goes on.

Harry, Ron, and Hermione, having passed their O.W.L. level exams, start on their specialist N.E.W.T. courses. Sixth-year students learn to Apparate, losing a few eyebrows in the process. Teenagers flirt and fight and fall in love. Harry becomes captain of the Gryffindor Quidditch team, while Draco Malfoy pursues his own dark ends. And classes are as fascinating and confounding as ever, as Harry receives some extraordinary help in Potions from the mysterious Half-Blood Prince. (Synopsis from Goodreads.) 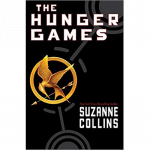 Most dystopian literature I’ve read once and haven’t returned to, but something about The Hunger Games brings me back to it now and then. I don’t even like Katniss as a main character, but the story is engrossing.

Could you survive on your own, in the wild, with everyone out to make sure you don’t live to see the morning?

In the ruins of a place once known as North America lies the nation of Panem, a shining Capitol surrounded by twelve outlying districts. The Capitol is harsh and cruel and keeps the districts in line by forcing them all to send one boy and one girl between the ages of twelve and eighteen to participate in the annual Hunger Games, a fight to the death on live TV. Sixteen-year-old Katniss Everdeen, who lives alone with her mother and younger sister, regards it as a death sentence when she is forced to represent her district in the Games. But Katniss has been close to dead before – and survival, for her, is second nature. Without really meaning to, she becomes a contender. But if she is to win, she will have to start making choices that weigh survival against humanity and life against love. (Synopsis from Goodreads.) 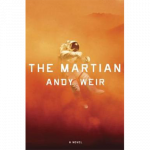 9. The Martian by Andy Weir

Six days ago, astronaut Mark Watney became one of the first people to walk on Mars.

Now, he’s sure he’ll be the first person to die there.

After a dust storm nearly kills him and forces his crew to evacuate while thinking him dead, Mark finds himself stranded and completely alone with no way to even signal Earth that he’s alive—and even if he could get word out, his supplies would be gone long before a rescue could arrive.

Chances are, though, he won’t have time to starve to death. The damaged machinery, unforgiving environment, or plain-old “human error” are much more likely to kill him first.

But Mark isn’t ready to give up yet. Drawing on his ingenuity, his engineering skills — and a relentless, dogged refusal to quit — he steadfastly confronts one seemingly insurmountable obstacle after the next. Will his resourcefulness be enough to overcome the impossible odds against him? (Synopsis from Goodreads.) 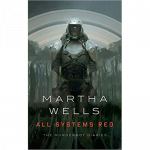 10. All Systems Red (The Murderbot Diaries #1) by Martha Wells

This series is one of my favourites, and the novellas are bite-sized. The best sarcastic robot since Marvin the Paranoid Android.

In a corporate-dominated spacefaring future, planetary missions must be approved and supplied by the Company. Exploratory teams are accompanied by Company-supplied security androids, for their own safety.

But in a society where contracts are awarded to the lowest bidder, safety isn’t a primary concern.

On a distant planet, a team of scientists are conducting surface tests, shadowed by their Company-supplied ‘droid — a self-aware SecUnit that has hacked its own governor module, and refers to itself (though never out loud) as “Murderbot.” Scornful of humans, all it really wants is to be left alone long enough to figure out who it is.

But when a neighboring mission goes dark, it’s up to the scientists and their Murderbot to get to the truth. (Synopsis from Goodreads.)

I challenge you to pick one of these books you’ve never read and dive in! Also, share your own top ten list of re-readable books on social media with the hashtag #rereadablebooks and we can share our favourite picks with each other!

Allison edits sci-fi and fantasy at Mythos & Ink publishing, writes books, and plays video games the rest of the time. She is the incurable author of Super Sick: Making Peace with Chronic Illness, a geek’s guide to living with a disability. You can find her chasing bokoblins in Hyrule, traipsing with hobbits in Middle-earth, or blogging at aealexander.com.

Machines capable of thinking and acting like humans. Robots with souls. Do they take over the world and attempt to destroy humanity? Are they depressed sidekicks? Do they just want to be left alone? It depends on the story, but all of these characters have one thing in common: they explore the question of what it really means to be human.