Let’s admit it: we do judge books by their covers. At least, the cover is often the first thing we see and  can entice us to pick it up and read the synopsis. There are some amazing cover artists and designers out there and they often don’t get enough credit for the fantastic work they do! Here are ten covers from this year’s fantasy novels that caught my eye. 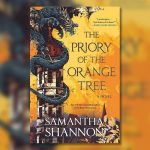 1. The Priory of the Orange Tree by Samantha Shannon

Cover illustrated by Ivan Belikov and designed by David Mann.

This is my favourite book and cover from 2019. I love the art style and the bright colours, which perfectly encapsulate the book’s vibrant storytelling.

“A world divided. A queendom without an heir. An ancient enemy awakens.

The House of Berethnet has ruled Inys for a thousand years. Still unwed, Queen Sabran the Ninth must conceive a daughter to protect her realm from destruction – but assassins are getting closer to her door…” [Read the full synopsis on Goodreads] 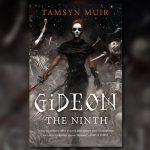 2. Gideon the Ninth by Tamsyn Muir

Cover art by Tommy Arnold and design by Jamie Stafford-Hill.

This cover alone enticed me to order Gideon the Ninth from the library. If possible, the cover of the second book, Harrow the Ninth, coming out in 2020, is even more breathtaking.

“Brought up by unfriendly, ossifying nuns, ancient retainers, and countless skeletons, Gideon is ready to abandon a life of servitude and an afterlife as a reanimated corpse. She packs up her sword, her shoes, and her dirty magazines, and prepares to launch her daring escape. But her childhood nemesis won’t set her free without a service…”  [Read the full synopsis on Goodreads] 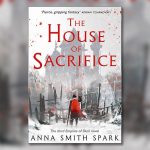 3. The House of Sacrifice by Anna Smith Spark

This is the UK version of The House of Sacrifice. I couldn’t find the artist’s name anywhere, but I love the black and white with the splash of red and the brushstrokes.

“Marith’s power is growing. His empire stretches across half the world, and allies are flocking to his banner to share the spoils of war. With Thalia ruling at his side they are unstoppable. 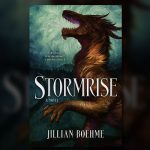 Another style with gorgeous brushstrokes, you can’t go wrong with a dragon on the cover.

“If Rain weren’t a girl, she would be respected as a Neshu combat master. Instead, her gender dooms her to a colorless future. When an army of nomads invades her kingdom, and a draft forces every household to send one man to fight, Rain takes her chance to seize the life she wants.

Knowing she’ll be killed if she’s discovered, Rain purchases powder made from dragon magic that enables her to disguise herself as a boy. Then she hurries to the war camps, where she excels in her training—and wrestles with the voice that has taken shape inside her head. The voice of a dragon she never truly believed existed…” [Read the full synopsis on Goodreads] 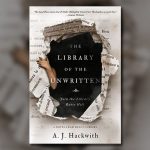 5. The Library of the Unwritten by A.J. Hackwith

This cover is wonderfully creative, with the title bursting out of a page. The warm reaching around hints at a bit of horror and captures the feel of the synopsis.

“Many years ago, Claire was named Head Librarian of the Unwritten Wing—a neutral space in Hell where all the stories unfinished by their authors reside. Her job consists mainly of repairing and organizing books, but also of keeping an eye on restless stories that risk materializing as characters and escaping the library. When a Hero escapes from his book and goes in search of his author, Claire must track and capture him with the help of former muse and current assistant Brevity and nervous demon courier Leto…” [Read the full synopsis on Goodreads] 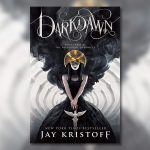 I’m a sucker for art that looks traditionally painted. Love the smoke and ripples in the background.

“Mia and her brother Jonnen must journey through the depths of the ancient metropolis. Their quest will take them through the Godsgrave underdark, across the Sea of Swords, back to the library of the Quiet Mountain and the poisoned blades of Mia’s old mentors, and at last the fabled Crown of the Moon. There, Mia will at last discover the origins of the darkin, and learn the destiny that lies in store for her and her world. But with the three suns now in descent, and Truedark on the horizon, will she survive?” [Read the full synopsis on Goodreads] 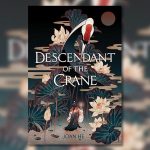 7. Descendant of the Crane by Joan He.

The Crane’s beak is part of the letters! *swoon* I love covers that capture the culture of an Asian-inspired story.

“Princess Hesina of Yan has always been eager to shirk the responsibilities of the crown, but when her beloved father is murdered, she’s thrust into power, suddenly the queen of an unstable kingdom. Determined to find her father’s killer, Hesina does something desperate: she engages the aid of a soothsayer—a treasonous act, punishable by death… because in Yan, magic was outlawed centuries ago…” [Read the full synopsis on Goodreads] 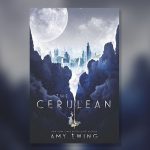 8. The Cerulean by Amy Ewing

“Sera has always felt as if she didn’t belong among her people, the Cerulean. She is curious about everything and can’t stop questioning her three mothers, her best friend, Leela, and even the High Priestess. Sera has longed for the day when the tether that connects her City Above the Sky to the earthly world below finally severs and sends the Cerulean to a new planet.

But when Sera is chosen as the sacrifice to break the tether, she doesn’t know what to feel…” [Read the full synopsis on Goodreads] 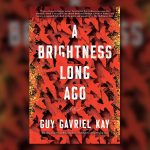 9. A Brightness Long Ago by Guy Gavriel Kay

Simple but gorgeous. Also fitting colours for a Canadian author.

“In a chamber overlooking the nighttime waterways of a maritime city, a man looks back on his youth and the people who shaped his life. Danio Cerra’s intelligence won him entry to a renowned school even though he was only the son of a tailor. He took service at the court of a ruling count–and soon learned why that man was known as the Beast…” [Read the full synopsis on Goodreads]

10. The Flight of the Darkstar Dragon by Benedict Patrick

I’ve been seeing more stylized, flat art styles like this and I love it. The boat traveling along the dragon’s wing is a particularly clever detail.

“Lost with her ship and crew in an unfamiliar land, Min’s first command could be her last.

Nothing here behaves the way it should:

The magic that powers her skyship has been drained, rendering it immobile.

The sky is an endless twilight, lit by the luminous fish that swim in it.

Off starboard, there’s also the country-sized dragon that is looking particularly hungry…” [Read the full synopsis on Goodreads]